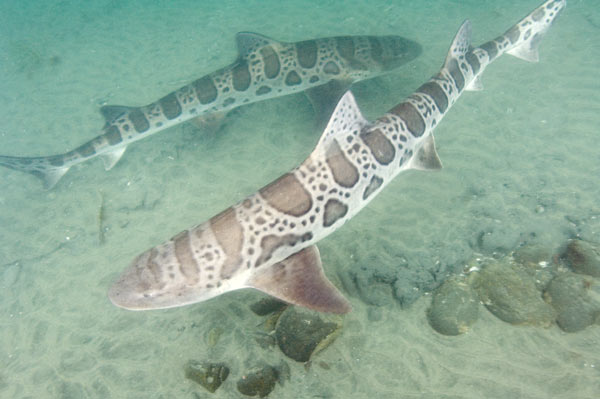 One of the most distinguishing features of this species is the bold dark bars draped across the dorsal surface. Additional dark spots are found along the lateral surfaces of the species. In adult specimens, the pectoral fins are broadly triangular. The anterior edge of the first dorsal fin appears behind the pectoral fins posterior edge. The caudal fin is elongate, and lacks a lower lobe altogether. This species is an active, strong swimming shark, often observed moving with an undulating motion. They are known to form large schools, occasionally aggregating with gray or brown smooth-hound sharks (Mustelus californicus and M. henlei) and piked dogfish (Squalus acanthias).

An abundant, temperate-water shark found in inshore and offshore continental littoral waters. Species is most common on or near the bottom from the intertidal zone to 4 meters in depth. Accordingly, the leopard shark is typically found in shallow enclosed muddy bays – usually entering as the tide rises and departing as the tide retreats. The species favors sand flats, mud flats, and rocky bottom areas near reef sites and kelp beds.