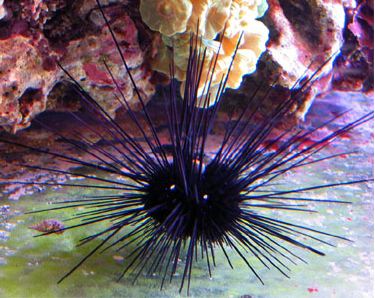 The Long Spined Urchin is also referred to as the lime urchin or black sea urchin.   These sea urchins are most commonly found on the coral reef of the tropical Western Atlantic Ocean, including the Caribbean Sea, Gulf of Mexico and the northern and eastern coasts of South America, as far south as Brazil. It is also found in the East Atlantic at the Canary Islands.   They will often lodge themselves in a crevice, so that only their spines can be seen, but individual urchins who can’t find a suitable crevice will live in more exposed situations.   These creatures are very sensitive to light, and will often pick its crevice or resting place based on how much shade there is.

The Long Spined Urchin has a shell, similar to most other sea urchins. What distinguishes the them from other sea urchins is the length of its spines. Most sea urchin spines are 1â€“3 cm, but the spines in this species are usually 4 to 6 inches in length, and can grow as long as 12 inches in very large individuals.   The spines on these urchins are particularly dangerous due to the fact that each spine is equipped with tiny barbs on the ends.   The barbs will get stuck under the skin of any predator.   If poked by a Long Spined Urchin, it can only be surgically removed.   The Long Spined Urchin is usually black in color with   a red eyespot in the center.   When approached by a fish, these urchins will sense their presence, and will defend itself by directing its spines towards the intruder .

These Urchins primarily graze on algae, and sometimes sea grass. They come out of their hiding place at night to forage for food, never traveling too far from their home.   Starving urchins have been known to become carnivorous.   This species is ecologically important because it consumes algae that can otherwise grow to such an extent that they can smother coral reefs.