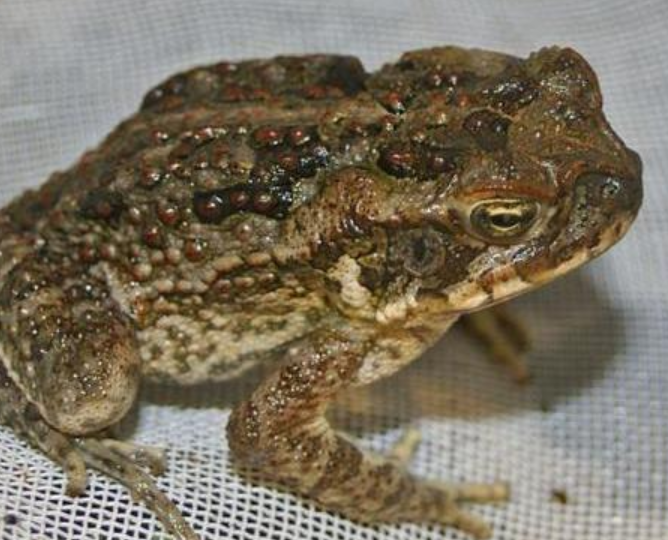 The marine toad (also known as the cane toad or the giant toad) is a species or terrestrial (land-dwelling) toad that is natively found throughout Central and South America. The marine toad is one of the world’s true toads and is often used to eradicate pests from sugar-cane (hence it’s name).

The marine toad is generally found in the subtropical forests of Central and South America, where despite it’s name, spends it’s life entirely on the land. The marine toad has also been introduced to non-native regions as a form of pest control for crops.

Marine toads tend to be around 15 cm in length although much larger individuals have been recorded. Marine toads are known to have poison glands which ensure that it has toxic skin. This means that if another  animal  ate the marine toad, it’s quite likely that it would lead to near, if not fatal, consequences.

Along with being used to control agricultural pests, the marine toad also has a variety of other uses to  humans  around the world. Traditionally, tribes people in South America would milk the toads for their toxin (called bufotoxin), which was then used as arrow poison. There are also suggestions that the toxins produced by the marine toad may have also been used as a narcotic by the local people.

As with numerous other toad species, the marine toad is a carnivorous  animal, primarily surviving on a  diet  of  insects. Due to their large size however, marine toads have also been known to hunt slightly bigger  animals  including rodents,reptiles,  birds  and even other amphibians.

Due to it’s relatively small size, the marine toad is preyed upon by a number of different species within it’s natural environment.  Caimans,  snakes,  rats, eels,  opossums  and various  birds  of  prey  are all  predators  of the marine toad.

Info and pic from http://a-z-animals.com/