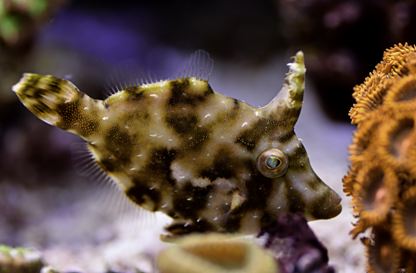 The Matted Filefish is a fish of many names.   It also known as the Bristletail Filefish, Matted Leatherjacket, Tomentosus Filefish, or Aiptasia Eating Filefish.   They are a saltwater fish that can be found throughout the Indo-Pacific region to East Africa, as far north as Ryukyu Islands, and as far south as New South Wales (Australia).   They are known to be reef inhabitants, living on the reef edge and over areas of rubble in shallow water.

Although they may have a strange appearance, they are remarkably designed to blend into their surroundings.   Typically, these fish are mottled brown or tan but also have olive green coloring.   Their pigment is patterned throughout the body to camouflage the fish in the algae covered environments they live in.   They are even reported as having the ability to change colors or shades, if their environment changes drastically.   They have a thin, oval shaped body with an elongated dorsal fin and a horn coming out of the top of their head.   These fish do not grow much larger than 3.5 inches in length.   However, males are usually larger than females.

The Matted Filefish is known to be a shy and docile fish, making it a popular choice for home aquariums.   They are not aggressive toward other fish, except those of their own species.

These fish are well known for eating the Aiptasia Anemone, but they also prey on mysis shrimp, scallops and squid.   They will also feast on marine algae and occasionally nipping on soft and stony corals.   They will swim around coral and rock formations and sea grass to find prey.