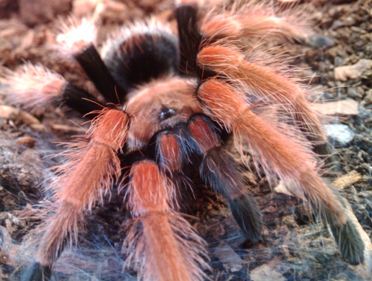 The Mexican Fireleg Tarantula is also known as Mexican Rustleg Tarantula or Guerrero Orange Legs Tarantula.   These stunning creatures are native to Mexico, along the central Pacific coast in western Guerrero State.   It prefers dry scrubland habitats.   They live in burrows that may be self made, but also may be abandoned rodent or lizard burrows.   The burrows are usually hidden under rocks or fallen logs.

These tarantula\’s have dramatic orange and black coloration.   They have beautifully colored legs that are a bright fiery red, gradually fading to orange and tipped with black feet.   These tarantulas reach a full grown length between 5 to 6 inches.   They have 8 tiny eyes that are only capable of distinguishing light for dark.   Although these spiders are not particularly defensive, they can have a nervous temperament, where the spider can flick urticating hairs when it feels threatened.   In fact, they have a reputation for being the most prone to hair throwing of the tarantula genus.

The Mexican Fireleg Tarantula\’s diet consists of crickets and other large insects such as lobster roaches, but have also been known to eat small geckos.   They do not build webs to catch their prey, but rather hunt down their victims.   The tarantula holds its prey with its pedipalps (front limbs) and injects it with venom delivered via two hollow fangs. This venom has a double purpose, paralyzing the prey, as well as beginning digestion.   Once the venom has acted, the tarantula is able to suck up the proteins and fats of its prey, leaving just a small ball of undigested body parts.