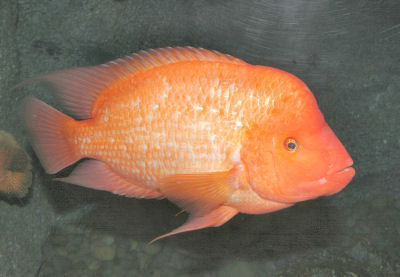 The Midas Cichlid  Amphilophus citrinellus  (previously  Cichlasoma citrinellum) is a large, eye-catching, and gorgeous show specimen. The coloring of the wild Midas Cichlid is a naturally camouflaging dark brown, gray to blackish body with six dark bars and a large black blotch on the side. However, this bar patterning seems to disappear once the Midas is introduced into the aquarium. In addition to their normal colorling, there is also a naturally occuring but seemingly out of place bright yellow color morph.

This cichlid has been extensively bred in captivity and has seen the development of a wide variety of striking color morphs. They range in colors from oranges, yellows, whites, and combinations of these colors. The most popular color morph is a creamy and sometimes spotted yellow colored specimen. In addition to the development of these various color morphs, breeding the Midas Cichlid has also been instrumental in developing the now very popular Flowerhorn Cichlid hybrid. Also, the Midas is currently being used in scientific studies examining certain aspects of fish behavior.

The Midas Cichlid is often very similar in color to the  Red Devil Cichlid  Amphilophus labiatus, and some websites mistakenly list them as the same fish. But although these two fish differ very little in their appearance, there are definite morphometric differences. For instance, the Midas Cichlid is a bit smaller than the Red Devil and will only reach about 10 – 14″ (25 – 35 cm) in length while the Red Devil can attain a size of up to 15 inches (38 cm). Their places of origin are also different. While the Midas Cichlid can range from Costa Rica to Nicaragua, the Red Devil is only found in the Nicaraguan lakes. Further confusing the issue is the fact that the number of available wild caught MIdas Cichlids has been much reduced in recent years, and thus many that are offered for sale today are actually a hybrid between the Midas and Red Devil.