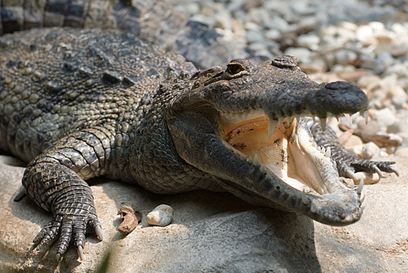 The Morelet’s Crocodile is also known as the Mexican crocodile, it is a modest sized crocodile found only in fresh waters of the Atlantic regions of Mexico, Belize and Guatemala. In their freshwater habitats they prefer isolated areas that are secluded.

Morelet’s crocodile is small in size compared to several other crocodiles. The males can become larger than the females. The adult crocodile averages 7.2â€“9.8 feet in length and around 84â€“130 lbs.   They have a very broad snout with 66 to 68 teeth when they are fully mature. Crocodiles can be distinguished from alligators because of their teeth in both their upper and lower jaws. Their teeth in both jaws are perfectly aligned. The fourth tooth on the bottom jaw of the crocodile is visible when their jaw is closed because it is slightly bigger than the rest of its teeth.

Crocodiles are carnivores. They capture their prey with stealth like techniques, slowing sneaking up on their prey. When a crocodile captures its prey they must first kill it before eating. Crocodiles kill the majority of their prey by grasping them in their muscular jaws and dragging their prey back into the water to drown.   Crocodiles have been known to be cannibalistic, this includes eating their young.

A female crocodile can lay between 20 and 45 eggs and nests have been found containing eggs from more than one female. The eggs are buried and the nests are guarded by females to protect their unborn young from predators. The eggs usually hatch after 80 days of incubation and hatchlings are normally about 6.7 in long. After the eggs have hatched the female crocodile will carry her young to the water where they are protected by both parents and will later leave them to fend for themselves.

Morelet’s crocodile is an endangered species.   They have long been threatened by habitat destruction and illegal hunting.   Both of these factors have significantly lowered their populations. It was hunted for its hide during the 1940s and 1950s, because high quality leather can be made from their skins.   Crocodile leather can be used to make wallets, coats and shoes.