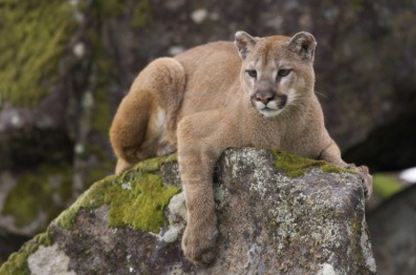 The Mountain Lion is often referred to as a Puma, Cougar or Catamount.   These cats are native to the Americas, from Florida swamps to Canadian forests.   Their habitat consists of dense underbrush and rocky areas, but they can be found in open areas as well.

Although, their coloration can vary, typically they are a tawny color but could also be a silvery grey or reddish color.   They have lighter colored underbodies, including the jaws, chin and throat.   They are a slender build and considered to be the fourth largest cat.   Their head and body can get to length between 3.25 to 5.25 feet, with the tail measuring between 23.5 to 33.5 inches.   They weigh in around 136 lbs, which makes them the second heaviest cat in the Western Hemisphere.   They have five retractable claws on its forepaws (one a dewclaw) and four on its hind paws.   The Mountain Lion is able to leap as high as 18 feet in one bound, and as far as 40 to 45 feet horizontally.   Their top running speed ranges between 40 to 50 mph, but is best adapted for short, powerful sprints rather than long chases. These agile creatures can climb and swim as well.

Mountain lions prey on deer, coyotes, porcupines, raccoons and other smaller animals.     They are a nocturnal, stalk and ambush predator, stalking their prey and then pouncing on it.   Their larger front feet are design for grasping onto prey.   They kill with a fatal bite to the back of the neck.   If a larger animal is killed, they will hide the carcasses and feed on it for several days.

These big cats cannot roar, but do make sounds similar to the house cat.   They will hiss, growl and purr, but they are well known for their screams.