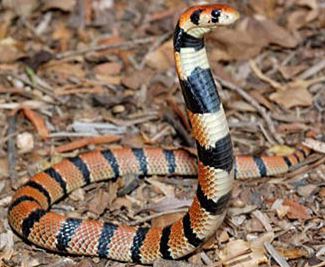 This snake is best known as a Cape Coral Cobra and is a species of venomous elapid snake found in parts of southern Africa.   This species of snake is found from the Karoo in the Cape Province in South Africa northwards into Namibia. It inhabits Karroid and dry sandy regions, particularly rocky outcrops. It lives in sandy and stony areas like semi-arid scrubland and desert fringes.

The Cape coral snake is a small elapid with an average size of   1.6 to 2.0 feet, but some are known to reach over 2.5 feet in length. Like other members of the genus Aspidelaps it does have an enlarged rostral scale. The body scales are smooth. Coloration ranges from orange to coral red, but some can be a bit yellowish. It has 20-47 narrow, well-defined black crossbars, which may encircle the body and tail.

The Cape coral snake is a nocturnal species. It spends most of it life underground in burrows or beneath stones. It emerges at night (particularly cooler nights) to feed on small vertebrates.   It preys on lizards (especially legless skinks, small snakes and small rodents).   It will rear up, spread its narrow hood, and hiss loudly if confronted or threatened. They seem to have a reputation for being bad tempered, but often strike with its mouth closed.   Little is known about the toxicity of their venom, but it is believed to be dangerously neurotoxic and requires immediate medical attention. In mice, the venom caused neurological symptoms, with death resulting quickly from respiratory failure.

Females lay between 3 – 11 eggs in the summer and has been known to lay several batches of eggs in one season.   The young snakes measure 17-18 cm.