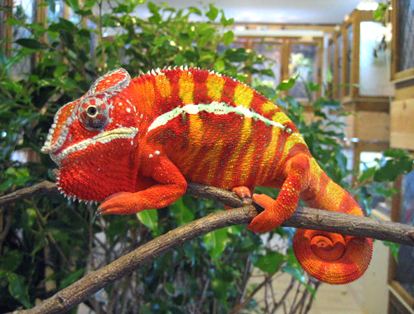 The Panther Chameleon is native to Madagascar.   Typically they inhabit lowland humid forests in the coastal regions and islands of central-eastern, north-eastern, northern and north-western Madagascar.

The Panther Chameleon has the most spectacular color variations of all chameleons.   The colors of these creatures vary by location.   Numerous color phases and patterns occur with regions as well.   Females generally remain tan and brown with hints of pink, peach, or bright orange, no matter where they are found, but there are slight differences in patterns and colors among the different color phases.   Male Panther Chameleons are larger and are more vibrantly colored.   Males can reach length of 20 inches, while females are 10 inches.   They are an aggressive creature that moves extremely slowly.   They walk in a slow rocking motion, moving bodies from side to side.

These creatures generally prey on invertebrates.   They have independently moving eyes that can scan the surrounding area for prey.   They can remain completely still and camouflaged for extended periods of time and wait to ambush their prey.   They are famous for their long, sticky tongues that they use to catch prey. The tongue can be more than 1.5 times the length of their body. They “shoot” their tongue out and catch their prey by a combination of the sticky tongue and a vacuum created by muscles in the tip.