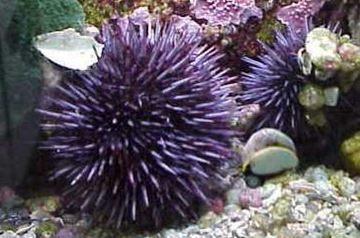 The Pincushion Urchin originates in the tropical marine water bodies such as, the Eastern Indian Ocean and the Western Pacific Ocean.   Today, they are found in various warm bodies of water all over the world.   Their habitat consists of reefs, rock crevices and caves.

As their name indicates, they have the appearance of a pincushion.   They are a small round or oval ball with spines all over its body.   Their spines are not poisonous but they do shed their spines when molting or stressed.   Their spines serve as protection from predators.   Sea otters, wolf eels, triggerfish, and other predators feed on them.   They do not get much larger than about baseball size.   Their coloration varies greatly, from blue, purple, brown, black, red, white and many more.

Pincushion urchins are nocturnal herbivorous animals and forages at night on primarily phytoplankton, algae and seaweed.   They do not have eyes or ears, but they do have a mouth.   Their mouth is located on the underneath side of their body so that they can feed while moving around.   These urchins have 5 teeth that aide in tearing into plants and algae.   These teeth are continuously growing because they wear down on the corals and rocks.   They move around like starfish and sand dollarsâ€¦with tube feet on the underside of their bodies.   During the day, they hide in the rock crevices and caves.

The name “urchin” is an old name for the round spiny hedgehogs that sea urchins resemble.