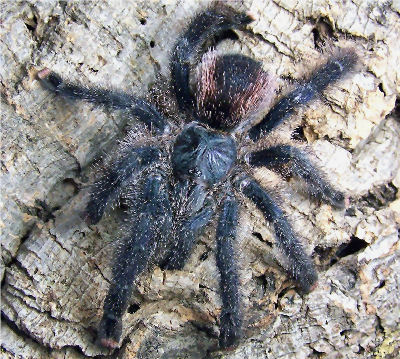 Known as the clown of tarantulas, pink-toed tarantulas are docile and usually bite only when provoked. Prior to biting, they exhibit warning postures and use urticating hairs along their abdomens to deter attackers. Unlike other tarantula species, pink-toed tarantulas are not able to release these urticating hairs and must instead make direct contact with predators. They have been recorded projecting fecal matter at enemies as another way to drive attackers away.

Pink-toed tarantulas are present primarily in New World tropical forested zones. Females produce many eggs at once and encase them in silk. The female will then protect this cocoon until the spiderlings hatch, typically several weeks later.

The Brazilian salmon pink tarantula (Lasiodora parahybana), is not as docile as other tarantula species. These spiders consume various prey, including invertebrates like insects and vertebrates like snakes or lizards. They can grow up to 25 cm in size.

The Mexican pink leg tarantula (Brachypelma klaasi) is a rare spider native to the humid, deciduous forest zones of Mexico. As with most tarantulas, females grow larger than males.