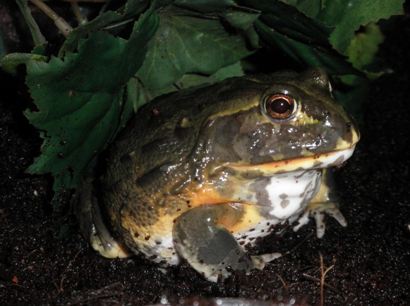 The Pixie Frog is commonly called an African Bull Frog. These frogs are native to Sub-Saharan Africa countries of Malawi, Zambia, Nigeria, Somalia, Mozambique, Angola, South Africa , Kenya, Zimbabwe, Tanzania and the Sudan.   It lives in open grasslands, can be found in puddles. In the dry season it burrows under ground.

The most obvious characteristic that differentiates these frogs from other frogs is its size; its one of the biggest.   In fact, it is the largest frog in South Africa.   The males can reach lengths of over 9 inches and females only 4 to 5 inches.   Some specimens can weigh up to 4.4 lbs.   Their skin color is a dull green; the males have yellow throats and the females throats are cream-colored.   The body of the frog is very broad, with a short rounded snout, protruding jaw, and tooth-like projections in its lower jaw. It has a large mouth, sharp teeth and very little webbing on its feet.  It has very strong hind legs, which it uses to dig holes in the ground.

The Pixie Frog can be quite lazy but will eat anything around it.   These frogs are carnivorous. It will feed on anything it can fit into its mouth, including insects, small rodents (such as mice), reptiles, birds, and amphibians (including other frogs).   It is quite aggressive, and has been known to jump at things that it views to be a threat. Because of its sharp teeth, its bite can be quite serious.