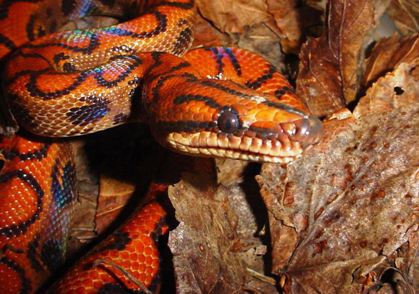 The Rainbow Boa is native to Central and South America which includes the Amazon Basin, Brazil, Guiana, Southern Venezuela, French Guyana and Suriname.   These creatures thrive in humid wooded forests, spending their days in trees and bushes and hunting at night. They are also referred to as Slender Boa.

Rainbow boa’s are known for their attractive iridescent sheen on their scales in the sunlight.   Generally uniform brown in color with large dark edged vertebral rings, with light centers forming saddles, this may also appear as a slightly off-center ‘S’ pattern. Remarkably they have the ability to change color.   They have a day to night color change. Primarily noticed in that their pattern will become a lighter almost silver and have molted silver sides and bottom.   Although individuals of abnormal colors and patterns exist.   The Colombian rainbow boa is moderate in size, 4 to 6 feet average. There is clear size differences between males and females, with females generally being significantly larger, in both length and girth, than males.