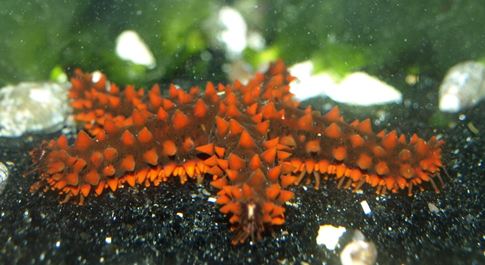 The Red Spiny Starfish is usually a bright red color but such color morphs as orange and brown exist.   These fish have a central disc surrounded by five tapering arms.   The upper disc and all five arms are covered in spines or knobs.   It is reported that starfish have the ability to regenerate a lost arm.   The regeneration processes may take years, all the while the starfish is vulnerable to infection and predation.   They also have an eye on the tip of each arm but their eye sight is still poor for having 5 eyes.   Starfish have tiny tubular feet with suckers on them with which it slowly crawls around the ocean floor.   The Red Spiny Starfish reach lengths of about 8 inches.

The Red Spiny Starfish does prey on mollusks such as clams, oysters, some snails, sponges or any other animal too slow to evade their attack.   They also feast on decomposing animal and plant material.