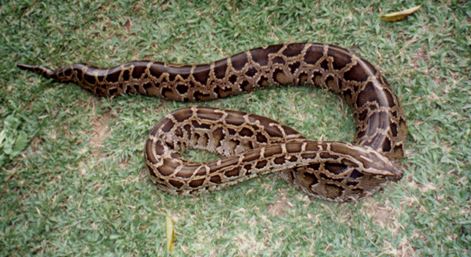 The Burmese Python is native to southern and southeastern Asia.   They are found in tropic and subtropical areas, usually in trees and often near water and seem to be an excellent swimmer. It can be found in grasslands, marshes, swamps, rocky foothills, woodlands, river valleys, and jungles with open clearings.   This species has established itself quite well in the Florida everglades, due to owners who cannot handle them anymore and releasing them.   Unfortunately, now these snakes are preying on native species in the everglades, making them an invasive species in south Florida.

Burmese Pythons are usually dark colored snakes with many brown blotches bordered in black down the back.     This is an impressive snake, reaching lengths of 12 – 19 feet.   The Burmese Python is considered to be one of the six largest snakes in the world.   They are good climbers and have tails that capable of grasping and holding.   Generally, they are a docile species (especially captive specimens), but can be aggressive as well, especially during feeding time.

These pythons are carnivores and prey on birds and mammals.   They are often found near human habitat due to the large numbers of rats, mice and other vermin.   Exceptionally large specimens have been known to attack pigs, goats, deer and alligators.   The snake uses its sharp rearward-pointing teeth to seize its prey, then wraps its body around the prey, at the same time contracting its muscles, killing the prey by constriction.

Although pythons are typically afraid of people due to their high stature, and will generally avoid people, special care is still required when handling them. A 16 foot python is quite capable of overpowering and killing a fully grown adult.