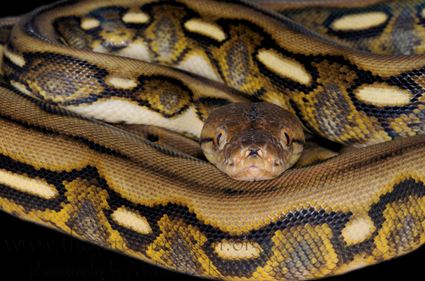 Reticulated pythons originate in Southeast Asia.   These snakes live in rain forests, woodlands, and nearby grasslands. It is also associated with rivers and is found in areas with nearby streams and lakes. They are excellent swimmer, it has even been reported they travel far out at sea and has consequently colonized many small islands within its range. During the early years of the twentieth century it is said to have been common even in busy parts of Bangkok, sometimes eating domestic animals.

This species is the largest snake native to Asia, in fact, they are the world\’s longest snake and longest reptile.   Many specimens reach 20 feet in length and can exceed 100 lbs. in weight.   The color pattern is a complex geometric pattern that incorporates different colors. The back typically has a series of irregular diamond shapes, flanked by smaller markings with light centers. In this species’ wide geographic range, much variation of size, color, and markings commonly occurs.

As with all pythons, they are primarily ambush hunters, usually waiting until prey wanders within strike range before seizing it in their coils and killing it via constriction.   Their natural prey includes mammals and birds.   Larger specimens will even attack primates and pigs.   Near human habitation, they are known to snatch stray chickens, cats and dogs on occasion.   As a rule of thumb, these snakes seem able to swallow prey up to ¼ their own length, and up to their own weight.

Attacks on humans are rare, but this species has been responsible for several human fatalities, in both the wild and captivity. They are among the few snakes that have been suggested to prey on humans. However, there are no authenticated cases of a snake species consuming human beings.