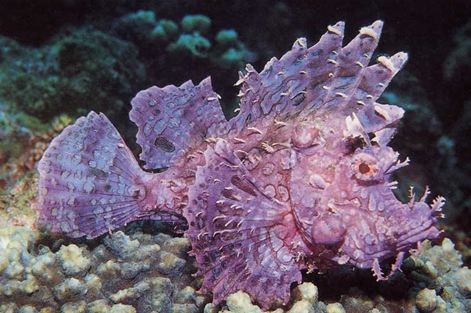 The Rhinopias Scorpion Fish are native to the Indian and Pacific Oceans.   They are most common in East Africa, Japan, Sri Lanka, Philippines and Indonesia.   They dwells in coral reefs on rocky or rubble bottoms, sometimes hiding among the coral or rocks.   These creatures can be found in depths between 10 to 300 feet.

As docile as they appear, don\’t be fooled – these fish are deadly!   Although not much is known about their venom, unlucky victims claim extreme pain and burning sensation.   Their venom housed in their spines that blend with it\’s fleshy exterior. When the Rhinopias Scorpions are alarmed or disturbed, their dangerous and venomous spines appear.

These creatures are masters at camouflage.   They blend in to their surrounds so well, that even seasoned divers may not notice them.   They do not swim, in fact, they do no move much at all.   The motion of the current will also gently sway their bodies, making them appear as part of the surroundings.   Their lack of movement causes a â€œslimeâ€ layer to form on the outside of their bodies, which they will shed fairly often.   This slimy layer often houses algae build up and parasites (from lack of movement).     Many times, their eyes cloud up just before shedding occurs.

Their usual prey is ghost shrimp, mollies, guppies, small octopus and other small reef animals.   The Rhinopias will eat almost anything that will fit in it\’s mouth.   In fact, they can swallow fish that are nearly as large as they are.   They lay in wait of prey to swim close by, slowly opening their mouth and a fraction of a second later, opening their gills.   This creates a suction and pulls their victim into their mouth.