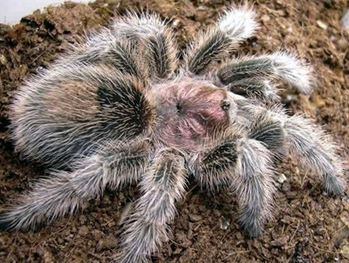 The Rose Hair Tarantula is also known as the Chilean rose tarantula, Chilean flame tarantula, Chilean fire tarantula or the Chilean red-haired tarantula (depending on the color morph).   Their natural habitat is the desert and scrub regions of Northern Chile, Bolivia, and Argentina.   While previously thought to be wanderers in nature, large numbers have been observed living in burrows in their natural habitat. Although, they generally do not burrow in captivity.

The Rose hair is a beautiful species, some are more brightly colored than others. They can grow to average legspan of 4-5 inches, with females getting slightly larger than the males.   The females will also have a longer lifespan (15-20 years) than the males (4-5 years).   They are solitary animals and fend for themselves.   As desert dwellers, they spend most of their days in their cool, moist burrows and will venture out at night.

The Rose hair tarantula are venomous and do have urticating hairs on their abdomen that they will throw if they feel threatened.   Their venom is not fatal to humans, but may cause some localized burning, pain or even itching.

These tarantula\’s have a diverse menu including grasshoppers, crickets, moths, beetles, cockroaches and mealworms. It can also grab hold of a pinky mouse.   Although, they go through a natural feeding cycle in the wild where it does not eat for months at times of the year when weather conditions dictate or the food is scarce.

Female Rose hair\’s have a gestation period of 6 weeks.   She will lay a large amount of eggs (the average is 600, but it could be as much as 1000 eggs).   She guards her egg sac aggressively until the spider lings emerge.