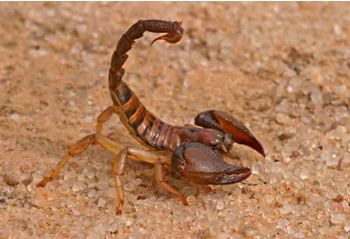 Scorpions are found on all major land masses except Antarctica. There are over 1000 known species of scorpions.   Scorpions may be ground-dwelling, tree-living, rock-living) or sand-living.   Some species are prefer specialized habitats and others are more versatile and can adapt to any habitat.

Scorpions have long carried a deadly and dangerous reputation due to the barb located at the end of their tail.   This barb or stinger is the method they use to inject their victim with their fast acting deadly venom.   The venom is primarily use to kill or paralyze their prey, but also as defense mechanism.     The venom is a mixture of compounds (neurotoxins, enzyme inhibitors, etc.) each not only causing a different effect, but possibly also targeting a specific animal. Each compound is made and stored in a pair of glandular sacs and is released in a quantity regulated by the scorpion itself.   There are about 25 various scorpion species that have venom that is deadly to humans. However, all scorpions are able to penetrate human skin and deliver sharp, unpleasant stings.

They have eight legs and are easily recognized by the pair of grasping claws and the narrow, segmented tail, often carried in a characteristic forward curve over the back, ending with their notorious venomous stinger. Scorpions range in size from 9 mm to 20 cm in length.   They range in color from a jet black, to various shades of brown or ivory.   Scorpions are also known to glow when exposed to certain wavelengths of ultraviolet light such as that produced by a black light, due to the presence of fluorescent chemicals in the cuticle.   This fluorescence may have an active role in scorpion light detection.

Scorpions are opportunistic predators of small arthropods, small lizards and mice. The large pincers are studded with highly sensitive tactile hairs, and the moment an insect touches these, they are pinched. They will then either crush the prey or inject it with neurotoxic venom. This will kill or paralyze the prey so the scorpion can eat it. Scorpions can only ingest their food in liquid form.   Scorpions can consume huge amounts of food at one sitting. They have a very efficient food storage organ and a very low metabolic rate combined with a relatively inactive lifestyle.