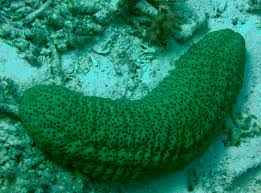 Sea cucumbers are echinoderms—like starfish and sea urchins. There are some 1,250 known species, and many of these animals are indeed shaped like soft-bodied cucumbers. All sea cucumbers are ocean dwellers, though some inhabit the shallows and others live in the deep ocean. They live on or near the ocean floor—sometimes partially buried beneath it.

Sea cucumbers feed on tiny particles like algae, minute aquatic animals, or waste materials, which they gather in with 8 to 30 tube feet that look like tentacles surrounding their mouths. The animals break down these particles into even smaller pieces, which become fodder for bacteria, and thus recycle them back into the ocean ecosystem. Earthworms perform a similar function in terrestrial ecosystems.

Sea cucumbers, particularly eggs and young larvae, are prey for fish and other marine animals. They are also enjoyed by humans, especially in Asia, and some species are farmed as delicacies.

When threatened, some sea cucumbers discharge sticky threads to ensnare their enemies. Others can mutilate their own bodies as a defense mechanism. They violently contract their muscles and jettison some of their internal organs out of their anus. The missing body parts are quickly regenerated.