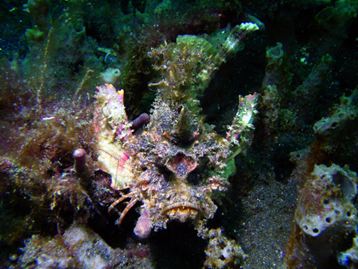 The Sea Goblin Scorpion has a collection of various names, Ghoul, Goblinfish, Spiny devilfish, Stinger, and Stingfish.   These truly disturbing, yet fascinating fish is found on sandy or silt substrates of lagoon and seaward reefs, in coastal regions of tropical oceans.   They stay in water depths between 5 and 450 meters.

These creatures are as dangerous as they looks.   They have several needle like dorsal spines which are venomous.   Upon contact with the dorsal fin, the fish can deliver a very painful, potentially fatal, sting.   Envenomation results in severe and immediate local pain, sometimes followed by shock, paralysis, tissue decay, and even death.   The body color can be a dull yellow, gray, brown, or rust in color with light blotches, and very similar to that of the surrounding sandy or coral seabed in which they are found. This coloration acts as a camouflage which renders them extremely difficult to detect in their natural habitat. The skin is without scales but does have wart-like glands which give it a knobby appearance.

These vicious, nocturnal predators ambush just about any creature that passes by.   Typically they partially buried themselves in the sandy bed with only their face exposed, waiting to ambush their prey.

These fish do not swim, instead using their pectoral fins as legs, they crawl slowly along the seabed.   They have no known natural predators. When threatened, they spread their brilliantly colored pectoral and caudal fins as a warning.