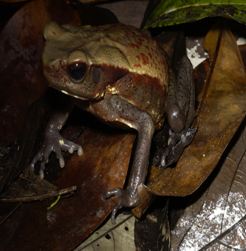 The Smooth Sided Toad is native to many continents, except for arctic regions.   They cover a huge geographic range including Australia, South America, Brazil, Bolivia, Peru, Ecuador, Columbia, Venezuela, Guyana, French Guiana and Suriname.   It lives at elevations from 164 – 2822 feet about sea level.   They inhabit subtropical and tropical regions of rainforests under leaf litter and in wetland areas with rivers, waterfalls, streams,   freshwater marshes and pools. They prefer microhabitats of small rock piles.

The smooth sided toad have stocky bodies with short limbs, making them poor jumpers.   Their head and back are light brown with dark bands along the side of the head and neck.   They have reddish brown throats and their bellies usually have cream colored spots.   The male toads have darker colors on their throat and they do not get as big as females.   Males usually reach an average size of 5-6 inches, while females get to about 10 inches.

These toads are venomous.   They secret their venom (called bufotoxin) from the bulbous parotoid glands behind their eyes.   This bufotoxin is a fatty, white substance that deters predators from eating them.   They can also inflate their bodies as an additional defense mechanism.

Female toads can lay as many as 10,000 eggs within a few hours of mating.   However, if there are too many eggs, some embryos may die due to a â€œcrowding effectâ€.   The tadpoles will hatch from the eggs after seven days.   They stay as tadpoles for six weeks before thy become juvenile toads.