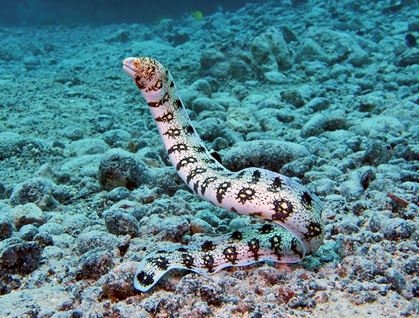 The Snowflake Moray Eel may also be referred to as Clouded Moray, Diamond Backed Eel or Starry Eel.   These creatures are found in the Indo-Pacific Oceans. The species is also found in the eastern Central Pacific from southern Baja California, Mexico, and from Costa Rica to northern Colombia.   Typically they are found in depth from 7 to 100 feet inhabiting caves and crevices.

The Snowflake Moray Eel has a white or silvery-grey body with black and yellow botches which resemble snowflakesâ€¦hence their name, Snowflake Eel.   They yellow eyes and yellow patterning on their head.   They have poor eyesight but a keen sense of smell.   These eels do not grow much longer than about 2 feet.   These creatures tend to be less aggressive than other eels.   However, they have a reputation for being escape artists in captivity.   They can get through the smallest holes in aquarium tops and make their way out.

These interesting creatures are a ferocious predator for fish and crustaceans.   They will sit in caves and crevices with just their head poking out, until prey comes near.   Then they shoot out and ambush their unsuspecting victim. These eels actual have two jaws.   The outer jaw grabs the prey and the second jaw shoots up into the main jaw, and drags the prey down the throat.