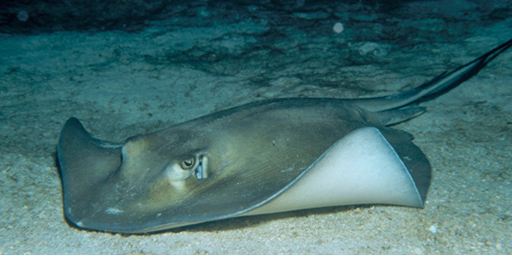 The Southern Atlantic Stingray is a member of the Whiptail Stingrays.   This species is found in tropical and subtropical waters of the Western Atlantic Ocean from New Jersey to Brazil.

The southern stingray is adapted for life on the sea bed. The flattened, diamond-shaped body has sharp corners, making it more angular than the discs of other rays.   The top of the body varies between olive brown and green in adults, dark grey in juveniles, while the underside is predominantly white. The wing-like pectoral fins are used to propel the stingray across the ocean bottom, while the slender tail possesses a long, serrated and poisonous spine at the base, used for defending themselves.   These spines are not fatal to humans, but are incredibly painful if stepped on. The eyes are situated on top of the head of the southern stingray, along with small openings called spiracles.   The location of the spiracles enables the stingray to take in water whilst lying on the seabed, or when partially buried in sediment. Water enters the spiracles and leaves through the gill openings, bypassing the mouth which is on the underside.

The southern stingray is an opportunistic forager, feeding on small crustaceans, such as alphaeid, penaeid and callianasid shrimp and brachyuran crabs; mollusks, bony fish, and lancelets.   It feeds by flapping the wing-like pectoral fins to disturb the sand and expose the prey.

The southern stingray is ovoviviparous (a method of reproduction in which the egg develops within the female\’s brood chamber). The pups hatch from their egg capsules inside the mother, and are born soon afterwards.   In captivity, gestation lasted 135 to 226 days, after which a litter of two to ten young were born.