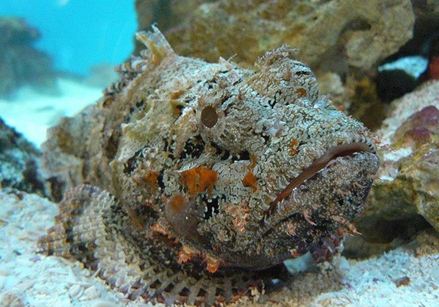 The Stone Fish are found in the coastal regions of Indo-Pacific oceans, as well as, in shallow waters off the coast of Florida and in the Caribbean, though some species are known to live in rivers.   These creatures live on sandy or rubble bottoms, under rocky ledges and around corals.   Not only do these fish live in water but they also can survive out of the water for up to 24 hours.

The Stone Fish are venomous, dangerous, and even fatal to humans.   It is one of the most venomous fish currently known in the world.   They have potent venom (classified as neurotoxins) which is secreted from glands at the base of their needle-like dorsal fin spines which stick up when disturbed or threatened.   This fish will not swim away if disturbed or threatened, in a defensive move, it simply raises it\’s spines and lays motionless.   Each fish has approximately 13 spines and each spine is deadly!   The pain is said to be so severe that the victims of its sting have been known to demand that the affected limb be amputated.

Their appearance also enhances their reputation as being dangerousâ€¦.   The encrusted exterior of the stonefish, aids its ability to camouflage itself with grey, brown and other mottled colors similar to the color of a stone, causing unsuspecting swimmers to step on them.   The amount of venom that is injected during a sting is proportional to the amount of pressure applied on the fish.   These fish grow to an average of 35 centimeters in length, but there are records of some specimens reaching 50 centimeters in length.

These creatures prey on shrimp and other small fish.   They will ambush it\’s prey, waiting for it to swim past and then strike at incredible high speed.