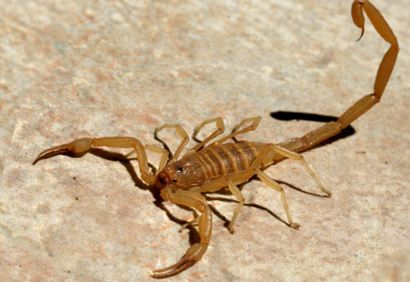 The Striped Bark Scorpion is an extremely common scorpion found throughout the midsection of the United States and northern Mexico. It is perhaps the most frequently encountered scorpion in the U.S.   These creatures can be found almost anywhere with plenty of crevices in which to hide or hunt.   Most often they found in forests, rocky areas, and buildings, where they can be a frequent indoor pest.

These scorpions are a medium-sized scorpion that is rarely longer than 3 inches.   They identifying characteristic are the two dark, longitudinal stripes on its body, with a dark triangular mark on its head. Their coloration is usually brown, some are a light brown or tan while other are a darker brown. Their color suits their environment well, providing them with a natural camouflage from predators as well as prey.

Although these creatures are not known to be aggressive they will defend themselves.   Due to the fact that these scorpion are commonly found in homes, buildings and other human dwellings, humans are often stung by this species of scorpion.   The sting can be extremely painful. For some, the worst passes in 15â€“20 minutes, but not uncommon to remain very painful with numbing sensations for 2â€“3 days.

Scorpions will generally try to kill and eat anything which moves and is smaller than themselves.   These creatures are avid hunters and will hunt down prey rather wait for it to cross their path.   These scorpions feed on various insects but mainly they seek out crickets.   Scorpions cannot consume solid food, so their venom is designed to turn the insides of their prey into liquid.