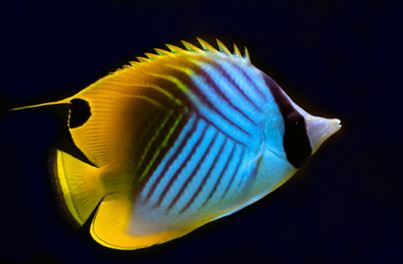 They are found in the Indo-Pacific region, from the Red Sea and eastern Africa, Hawaii, Marquesas and Ducie islands, north to southern Japan, south to Lord Howe Island and Rapa Iti.   These fish have several habitats that they can thrive in.   Usually, they are found amongst coral reefs where there are caves and crevices to hide in, but also offer plenty of open areas to swim.   They will congregate in areas that have plenty of plant and algae growth.

The Threadfin Butterflyfish can grow to approximately 9 inches in length. Their body is broad-shaped and compressed laterally.   The snout is elongated with small, sharp teeth.

It has a neck patch of ascending and a belly patch of descending oblique dark lines.   The front of the body is white and the back is yellow.   It has a black band that runs vertical down the head, which usually encompasses the eye.   They have a long filament that trails behind the upper dorsal fin with a black dot at the end of the dorsal fin.   They are capable of swimming a very high speeds.

The Threadfin Butterflyfish feeds primarily on annelid worms, plankton, shrimp, coral polyps, and sea anemones, and it can also be found grazing on algae. They poke into holes and crevices of the coral, looking for prey.