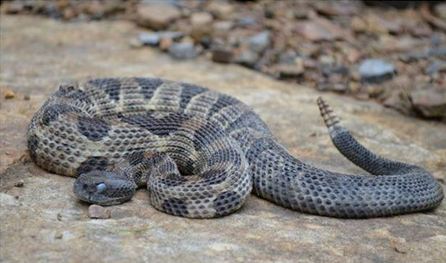 The Timber Rattlesnake may also be referred to as canebrake rattlesnake or banded rattlesnake.   This is a species of venomous pit-viper found in the eastern United States (from southern Minnesota and southern New Hampshire, south to east Texas and north Florida).   The timber rattlesnake was designated the state reptile of West Virginia in 2008.

Generally, this species is found in deciduous forests in rugged terrain.

Adults usually grow to an average length of 35 â€“ 60 inches.   Dorsally they have a pattern of dark brown or black cross bands on a yellowish brown or grayish background. The cross bands have irregular zig-zag edges, and may be V-shaped or M-shaped. Often a rust-colored vertebral stripe is present. Ventrally they are yellowish, uniform or marked with black.   Melanism (is a development of dark-colored pigment in the skin or its appendages) is common, and some individuals are very dark, almost solid black.

Potentially, this is one of North America’s most dangerous snakes, due to its long fangs, impressive size and high venom yield. Four venom patterns have been described for this species and is largely contributed to geographic location of the species.

Before striking, they often do a good deal of preliminary rattling, but would rather retreat than fight.   In fact, this species has a reputation for â€œdry bitingâ€ (biting without releasing venom) out of fear.   Their prey is mainly small mammals, but may include small birds, frogs, or other snakes. Although capable of consuming other rattlesnakes, the most common snakes they eat are garter snakes.