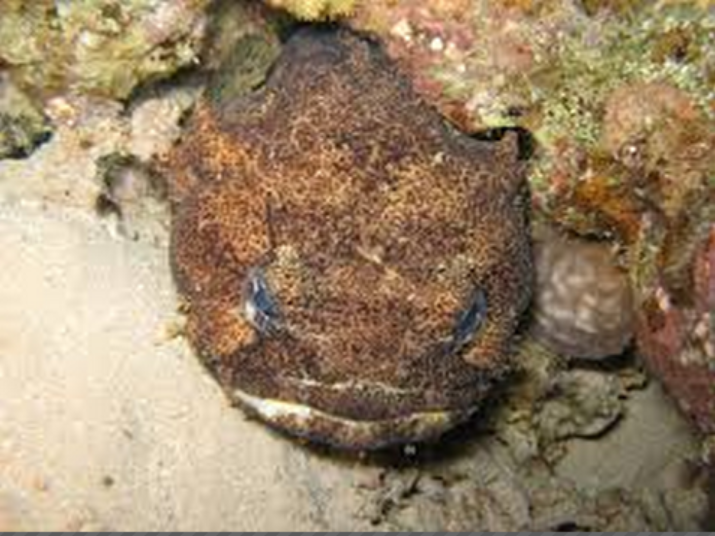 The toadfish, like the sculpins, has a large flat head, round nose, tremendous mouth, tapering body with plump belly, and fanlike pectoral fins. But it differs from all sculpins, and indeed from all other spiny-finned fishes of the Gulf of Maine except the  blennies  (p. 491) in the location of its ventral fins, which are under the throat well in front of the pectorals (“jugular”) instead of below the latter or behind them. And no one could confuse it with any blenny, for it is not only a totally different looking fish, but its dorsal fin is mostly soft rayed while that of the blennies is spiny throughout. The presence of fleshy flaps of irregular outline on the tip of the upper jaw and along the edge of the lower jaw, on the cheeks, and over each eye, gives its head a peculiar wary appearance. Distinctive, also, is the fleshy nature of all its fins and the outline of the dorsal, the soft part of which (26 to 28 rays) is five to six times as long as the spiny part (3 spines), from which it is entirely separated by a deep notch, the two together extending the whole length of the trunk from the nape of the neck nearly to the base of the caudal fin. The anal

[page 519]  fin (21 or 22 rays) is somewhat shorter than the second (soft) dorsal, orginates under about the eighth ray of the latter, and is similar to it in outline except that its rays are more or less free at their outer ends, especially in its forward half. The caudal fin is rounded; the ventrals covered by thick fleshy skin, are jagged in outline, with the first ray stouter than the others. There is a large open pit of unknown function in the axil of each pectoral fin.

We need only remark, further, that the skin is covered with a thick layer of slimy mucus. The toadfish has no scales; its teeth are large and blunt; and it has two short spines at the upper angle of each gill cover, hidden however, in the thick skin.