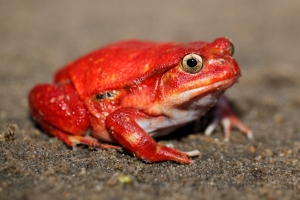 The Tomato Frog is a conspicuous red-orange frog belonging to the Microhylidae family. In Maroantsetra it has almost continuous activity all around the year. It lays the eggs mainly in the warmer periods (October-January), and they are dispersed on the water surface after an amplexus of several hours. The typical calls emitted by males gives the onomatopoetic name of saogongogno attributed by local populations to this species. It is present in eastern and northeastern Madagascar, with two main nuclei, one around and within the town of Maroantsetra, and the other in the surroundings of Antara, close to the town of Toamasina. It is a species adapted to live in quite open spaces, usually in marshes and still-water channels. It does not occur within rainforests, although it needs humid sites. Like other representative of the family it is terrestrial and fossorial, and is mainly active during rainfalls. It is assessed as ‘Near Threatened’ by the IUCN Red List of Threatened SpeciesTM.

The Tomato Frog is suffering from the alteration of its original habitats. Once common in Maroantsetra, it appears to become rarer due to the growing urbanisation. Until the end of the Eighties of last century the species was actively searched for the international pet trade, and for this reason it was included in CITES Appendix I. Nowadays its capture and commerce are forbidden.

Current conservation actions include the realisation of a dedicated breeding habitat within Maroantsetra. Named “Tomato Frog Village” it protects one of the most prominent populations living in this town, and gives opportunity to local children of looking at one of the most attractive and known frogs of Madagascar. More conservation actions are still badly needed, especially to protect the species urban population of Maroantsetra, and include some of the other populations in the network of protected areas.