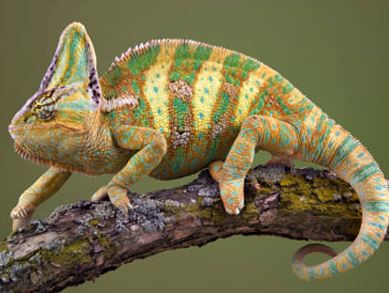 The Veiled Chameleon is also referred to as the True Chameleon and Yemen Chameleon.   These creatures are native to the mountain regions of Yemen, the United Arab Emirates, and Saudi Arabia. Their habitat may include dry plateaus, mountains, and river valleys, usually living in trees, bushes, or shrubs.

As their name indicates, they have a casque, a helmet-like ridge, on top of their heads, which is hardly noticeable as a hatchling, but will grows to two inches in height as the animal matures.   Their coloration is bold and bright.   Their colors usually include bold bands of bright gold, green, and blue, mixed with yellow, orange, or black, that circle their body. The males are usually more strikingly colored than the females, which are usually shades of green patterned with shades of tan, orange, white, and sometimes yellow.

Chameleons have a famous reputation for their ability to change color. They change color   for several reasons.   Typically they assume the colors of their surrounding but may also change colors to signify emotion.   The ability to change color is their primary source of defense. Veiled chameleons when startled or threatened may darken in color and “play possum.”   They are an aggressive creature that moves extremely slowly.   They walk in a slow rocking motion, moving bodies from side to side.

The Veiled Chameleons generally prey on insects but may also eat vegetation during dry seasons for hydration.   They can remain completely still and camouflaged for extended periods of time and wait to ambush their prey.   They are famous for their long, sticky tongues that they use to catch prey. The tongue can be more than 1.5 times the length of their body. They “shoot” their tongue out and catch their prey with it in a split second.