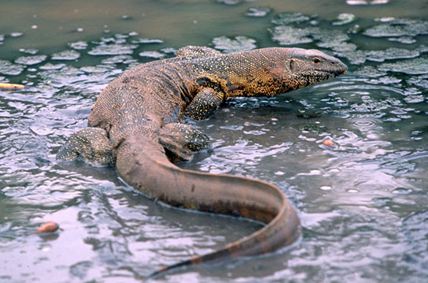 The water monitor is a large lizard native to Southern Asia. Water monitors are one of the most common monitor lizards found throughout Asia, and range from Sri Lanka, India, Indochina, the Malay Peninsula and various islands of Indonesia, living in areas close to water.

The Water monitor is a large species of monitor lizard.   Most adults grow to 4.9â€“6.6 feet in length and weigh approximately 43 lbs. However, they can get as large as 9.8 feet in length and up to 200 lbs in weight. They are the world’s second heaviest lizard, after the Komodo Dragon. Their body is muscular with a long, powerful, laterally compressed tail.

Water monitors can be defensive, using their tail, claws, and jaws when fighting. They are excellent swimmers, using the raised fin located on their tails to steer through water. Water monitors are carnivores, and have a wide range of foods. They are known to eat fish, frogs, rodents, birds, crabs, and snakes.   They have also been known to eat turtles, as well as young crocodiles and crocodile eggs.   Water monitors have been observed eating catfish in a fashion similar to a mammalian carnivore, tearing off chunks of meat with its sharp teeth while holding it with its forelegs and then separating different parts of the fish for sequential consumption.

Each female produces up to 40 eggs per year, but usually these will be in two or more clutches, laid in natural mounds such as termite hills, in rotten or hollow tree trunks or in excavated burrows. Good, well protected sites may be communally used by several lizards. Usually after laying, the nest will be covered over. Incubation takes several months but the actual period varies quite considerably according to climate and season of laying – an adaptability to conditions which has greatly assisted the lizard’s widespread distribution throughout South east Asia.   Hatchlings are about 12 inches long. Juvenile lizards are brightly colored with yellow blotches and bands on the tail against a darker background. These young monitors tend to be more timid than adults and hide away more. Usually it takes about 2 years to reach maturity, and adults can then live for about 15 years.