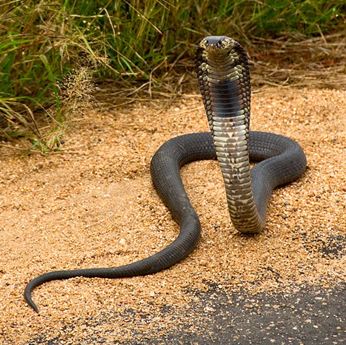 The West African Spitting Cobra may also be called Mali cobra or Katien spitting cobra.   This species is native throughout western Africa.   Found in Sudan savanna and semi-desert, its range penetrates into the northern Guinea savanna. However, it is not found in desert or dense woodlands.

This species is a small-sized cobra, growing to an average size of   about 2 feet in length, but some will grow to a maximum length of just slightly above 3.3 feet. The body is slightly depressed but cylindrical, tapered and is moderately slender with a moderately long tail.   The head is broad, flattened and slightly distinct from the neck.

This species is active during the day (diurnal) and at night and is a terrestrial species, but often climbs into small bushes. This snake takes shelter under logs, rocks or in holes when inactive. If threatened, it will quickly look for an escape, but if cornered, will rear up and spread its small, narrow hood. If further provoked, it will spit its venom or strike and bite. It feeds mostly on amphibians such as toads and frogs, but it will also prey on rodents and other snakes.

The venom of this species consists of postsynaptic neurotoxins and cardiotoxins with cytotoxic activity.   An average wet venom yields about 100 mg for this species.   If the snake spits venom into the eyes of an individual, the individual will experience immediate and severe pain as well as temporary and sometimes permanent blindness.