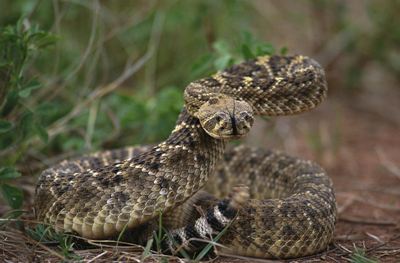 The Western Diamondback Rattlesnake is a venomous rattlesnake species found in the United States and Mexico (from central Arkansas and southeastern California, south into Mexico as far as northern Sinaloa, Hidalgo and northern Veracruz).   Found in areas ranging from flat coastal plains to steep rocky canyons and hillsides. It is associated with many different vegetation types, including desert, sandy creosote areas, mesquite grassland, desert scrub, and pine-oak forests.

Adults commonly grow to 4-5 feet in length. While there are rare specimens that reach 6 feet in length.   The color pattern generally consists of a dusty looking gray-brown ground color, but it may also be pinkish brown, brick red, yellowish, pinkish or chalky white. This ground color is overlaid dorsally with a series of 24-25 dorsal body blotches that are dark gray-brown to brown in color.

Life expectancy is more than 20 years, but is typically shorter because of hunting and human expansion. Solitary outside of mating season, they are one of the more aggressive rattlesnake species found in North America because they rarely back away from confrontation. When threatened they usually coil and rattle to warn aggressors.   It will hunt or ambush it\’s prey, usually many small rodents, rabbits, and birds.

This species is far less toxic than many other rattlesnakes, but still require medical attention.   A bite from this rattler can cause pain, bleeding, severe swelling, bruising, blistering, necrosis, headache, nausea, vomiting, abdominal pain, diarrhea, dizziness, and convulsions.   Mortality rate of untreated bites is between 10-20%.