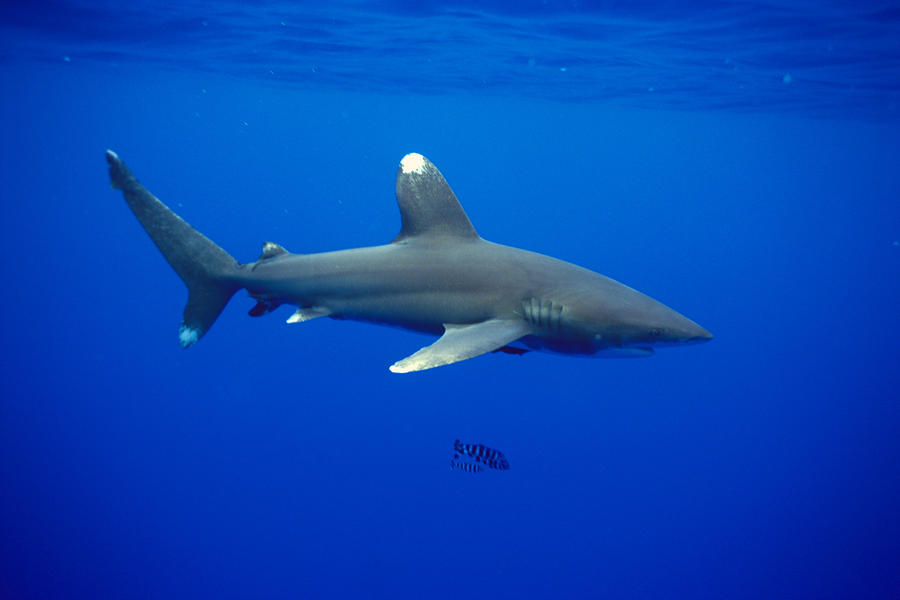 The most distinguishing characteristic of a whitetip shark is its long, winglike pectoral fins and dorsal fin. These fins are noticeably larger than expected; they are also conspicuously rounded. The shark’s nose is also rounded, and its eyes are circular with nictitating membranes. C. longimanus has a ‘typical’, although somewhat flattened requiem shark body, often with a mildly humpbacked aspect. It is bronze, brown, bluish, or grey dorsally (the color varies by region), and white ventrally (though it may occasionally have a yellow tint). The teeth of the upper jaw are triangular and serrated, while those in the lower jaw are narrow and somewhat fang-like. Most of the fins on its body (dorsal, pectoral, pelvic, and caudal) have a white tips, from whence the name comes.

Solitary Shark? The whitetip shark typically lives on its own, though some gatherings are notable where food is available. Unlike many animals, it does not operate on a day-and-night basis, but rather swims during both â€” its swimming style is slow with the pectoral fins widely spread. Despite their decided isolation from others of the same species, they may be observed with pilot fishes, dolphin fishes, and remoras. In 1988 Credit: NOAAJeremy Stafford-Deitsch reported seeing the species accompanied by a shortfin pilot whale.

Not So Picky: C. longimanus feeds mainly on pelagic cephalopods and bony fish. However, its diet is often far more varied and less selective â€” it is known to eat threadfins, stingrays, sea turtles, sea birds, gastropods, crustaceans, mammalian carrion and even rubbish dumped from ships. The bony fish it feeds on include lancetfish, oarfish, barracuda, jacks, dolphinfish, marlin, tuna, and mackerel. Its method of obtaining food often includes biting into a group of fish, or swimming through schools of tuna with an open mouth. When feeding with other species, it becomes aggressive. Peter Benchley has observed this shark swimming among pilot whales and eating their faeces.

Feeding Frenzy I: Groups are often formed when several nearby individuals converge on a food source, whereupon the fabled “feeding frenzy” may occur. The frenzy seems triggered not by blood in the water per se, or by bloodlust, but by the species being especially high-strung and goal-directed when not slowly plying the open ocean, conserving energy between infrequent food events. C. longimanus is a competitive, opportunistic predator with great incentive to exploit the resource at hand, rather than avoiding trouble in favor of a possibly easier meal in the future.

Followers: There does not seems to be a segregation by sex and size as with some other species. Whitetips will follow schools of tuna or squid, and will follow groups of cetaceans such as dolphins and pilot whales as scavengers of the cetaceans’ prey. They follow boats as well, and indeed seem to have a vital following-impulse, developed over countless millennia of baitfish migrations and doglike hope that the followed might drop a piece of whatever he is eating. When whaling was still taking place in warm waters, oceanic whitetips were often responsible for much of the damage to floating carcasses.