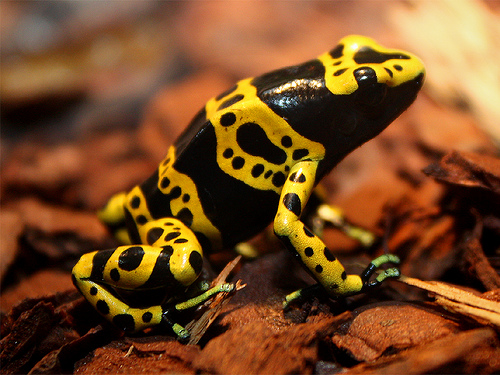 Vibrant but toxic,  poison arrow frogs range from less than an inch to two and a half inches in body length. There are more than 100 species of poison dart frogs, varying in color and pattern. The black and green species has black spots, the strawberry or blue jeans frog is all red with blue legs, the yellow-banded species appears painted with yellow and black. Color shades vary among frogs within a species. It is the skin that contains the frog’s poison.

These beautiful colors are warnings to potential predators that the frogs are poisonous. Other species, such as monarch butterflies, sport bright colors to advertise their toxicity. Several species of non-poisonous frogs evolved with similar coloring to avoid being eaten. Some scientists think that the reticulated pattern of the frogs also acts as camouflage among the forest shadows.

Poison dart frogs, also called poison arrow frogs, are so named because some Amerindian tribes have used their secretions to poison their darts. Not all arrow frogs are deadly, and only three species are very dangerous to humans. The most deadly species to humans is the golden poison arrow frog (Phyllobates terribilis). Its poison, batrachotoxin, can kill many small animals or humans. These frogs are found in Colombia along the western slopes of the Andes. Arrow frogs are not poisonous in captivity. Scientists believe that these frogs gain their poison from a specific arthropod and other insects that they eat in the wild. These insects most likely acquire the poison from their plant diet.

In 1999 a Zoo pathologist published his discovery of a then-mysterious infection that was afflicting and eventually killing poison arrow frogs and white\’s tree frogs. Through his effort, cutaneous chytridiomycosis was documented for the first time as a vertebrate parasite. The veterinarians along with keepers and pathologists also developed a treatment for the chytrids. The same antifungal that is used to kill athletes\’ foot in humans can be used with the frogs and toads.