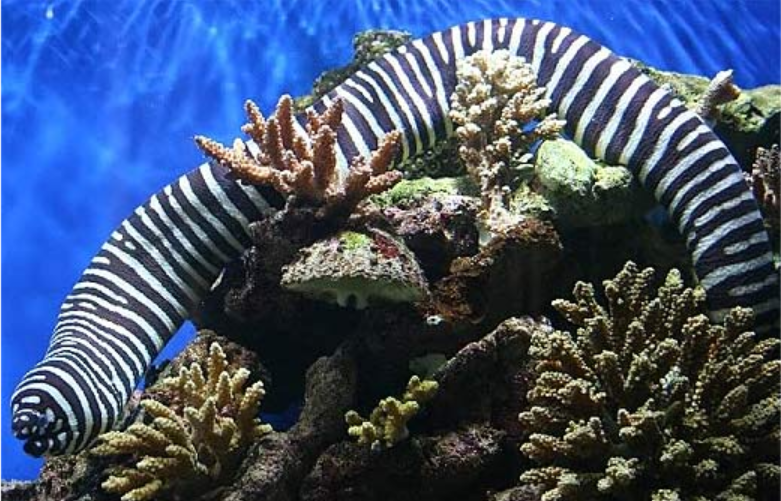 The zebra moray eel is a mid-sized species of moray eel that has become known for its black and white  striped appearance. The striped eel commonly has a length of up to 4.9 feet (1.5 meters), but many  specimens  found are much smaller. They are found in their habitat primarily in the reefs of the Indo-Pacific region and the  eastern  Pacific region; including California (United States), Mexico, Columbia, the Galapagos Islands, and of  course  the make a handsome appearance in people’s  aquariums  worldwide.

The zebra moray eel has become known as a danger to humans. The truth though is, that the eels only attack in  self defense, and most bites on humans are the result of mistaken identity or attempts by humans to hand feed them â€“ don’t try it! Like all morays, its bite has a weak release mechanism and therefore its jaw must be pried off (even in death during cases of human bites). Contrary to popular belief, their bite is not poisonous naturally, but may cause infections because of the toxic bacteria-laden algae that they eat.

The zebra morays have also become known for their practice of hunting in cooperation with groupers; the only cooperative hunting that has ever been observed to go on among fish. Morays are recruited by groupers in order to use their  ability  to enter small crevices to flush out prey such as crustaceans,  sea urchins, and mollusks; which are pretty much the only prey that zebra morays feed on. The “bounty” from these hunts is then shared between  species.

As we stated before, morays have primitive biting system, but that’s based sheerly on their first set of jaws, but they also have second set, known as pharyngeal jaws, that rest deeper in their bodies and are shot out into their main jaws when trapping prey.

Info and pic from http://www.factzoo.com/