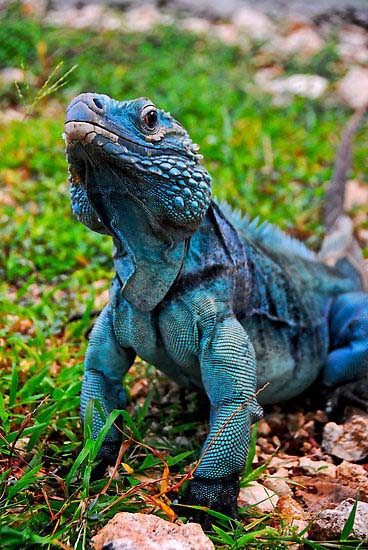 The blue iguana prefers dwelling in rocky, sunlit, open areas in dry forests or near the shore, as the females must dig holes in the sand to lay eggs in June and July. A possible second clutch is laid in September. The blue iguana’s vegetarian diet includes plants, fruits, and flowers. Its coloration is tan to gray with a bluish cast that is more pronounced during the breeding season and more so in males. It is large and heavy-bodied with a dorsal crest of short spines running from the base of the neck to the end of the tail.

The fossil record indicates that the blue iguana was abundant before European colonization; but fewer than 15 animals remained in the wild by 2003, and this wild population was predicted to become extinct within the first decade of the 21st century. The species’ decline is mainly being driven by predation by feral pets (cats and dogs) and indirectly by the destruction of their natural habitat as fruit farms are converted to pasture for cattle grazing. Since 2004, hundreds of captive-bred animals have been released into a preserve on Grand Cayman run by a partnership headed by the Durrell Wildlife Conservation Trust, in an attempt to save the species. At least five non-profit organizations are working with the government of the Cayman Islands to ensure the survival of the blue iguana. According to the November 9, 2013 episode of Ocean Mysteries with Jeff Corwin, the conservancy program has released over 700 captive bred Grand Cayman blue iguanas since the 2004 nadir of only 12 remaining animals.