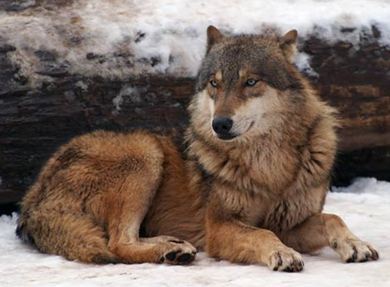 The British Columbian Wolf was once found in the greater part of British Columbia, parts of Yukon, Alberta, and southwestern Alaska.   They prefer the open tundra and forests of British Columbia, but have been hunted to extinction in these parts. Although they once inhabited most of North America, now distribution occurs in only Alaska, Canada, and parts of the U.S.A.   They are a sub-species of the Grey Wolf.

The British Columbian Wolf was one of the larger subspecies of the Gray Wolves in North America. They weigh between 80-150 pounds, and have long coats which were usually black, often mixed with grey, or brown. They measure roughly 60 to 70 inches in length.   This species lives in packs and can have anywhere from 2 to 30 pack members.

The British Columbian wolf, is similar to many other wolves, they are described as a predatory, carnivorous pack mammal.   However, they kill only to survive. They will chase down their victims and either slash the tendons or drive the victim back to waiting pack members.   Their usual diet consists of hares, birds, deer, moose, caribou, elk, and other ungulates.

This wolf species mates for life.   The female wolves breed once a year, December through March.   She will have a gestation period of 63 days and usually will have a litter of 4-6 pups.   All members of the pack will help care and protect the pup, which aids in uniting the pack.

This is an endangered species, conservation and re-introduction efforts have been underway since 1985.