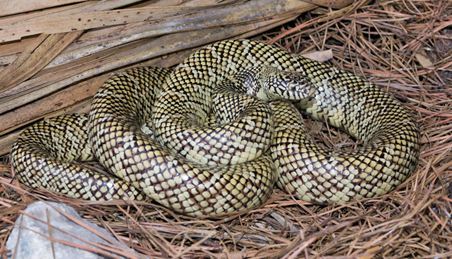 The Brooks King Snake is a sub species of the Florida King Snake and it is not found in many regions.   This snake is native to Florida, especially the southern parts, like the Miami Rim Rocks and southern everglades.   These snakes have been found in farmlands, swamps and everglades.   They are also common around irrigation canals because of their good swimming ability.

The Brooks King Snake is a non-venomous snake and is not harmful to humans, but their bite is considered medically significant.   They have a variety of unique coloration and exhibit beautiful patterns.   Usually the males are larger than the females, reaching an average length of 4 to 6 feet.

These snakes feeds on lizards, mice, rats and other snakes – even venomous snakes (ie. Rattlesnakes, coral snakes, copper heads).   They are a diurnal (day time activity) species, however, in extreme heat they will hide during the day and emerge at night.   If this snakes feels cornered or threatened, it will hiss and shake its tail before attacking.   It also uses its feces as a defense mechanism.
Females will lay between 8 to 18 eggs in one clutch, usually in late spring to early summer.   They have a short breeding cycle because they do not hibernate during the winter like many other species.