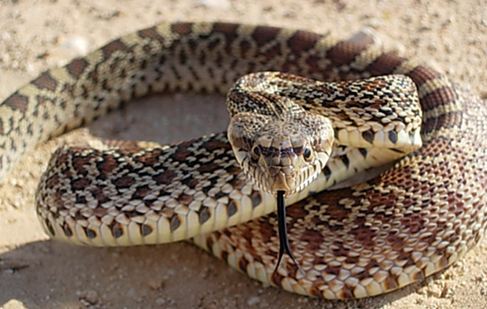 Bullsnakes average about 6 feet in total length, and some have been recorded as long as 8 feet 4 inches.   Adult snakes typically weigh in between 2.2 to 7.9 lbs.   The Bullsnake is considered to be among the largest snakes native to the U.S.   Their coloration is usually yellow, with brown, black or sometimes reddish colored blotching. Typically they have large blotches on top, three sets of spots on the sides, and bands of black on the tail. Many color variations have been found, including albinos and white varieties.   Many times these snakes are mistaken for rattlesnakes.

Bullsnakes are extremely defensive and have a reputation for having a â€œbad attitudeâ€.   When threatened by anything as large as a human, a bullsnake’s primary defense is to rear up and make itself look as large as possible. It typically then begins lunging and retreating at the same time in order to escape.

Bullsnakes prey on small mammals, such as mice, rats, pocket gophers, ground squirrels, and rabbits, as well as ground nesting birds, birds’ eggs and lizards.   They kill their prey via constriction.