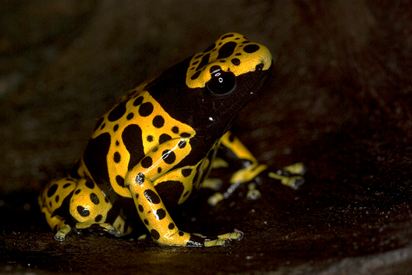 The Bumblebee Poison Dart Frog is also known as yellow-banded poison dart frog or yellow-headed poison dart frog.   They are found in the northern part of the continent of South America, most notably in Venezuela. It is also found in parts of Guyana, Brazil and the extreme easternmost part of Colombia. This amphibian is normally found in very humid conditions in tropical rain forests, close to fresh water. It is often found on flat rocks, trees, plants and the leaf litter of the forest floor. During the dry season, specimens are known to congregate in damper places, such as under rocks or fallen tree trunks.

The average adult bumblebee rarely exceeds 4 cm and they usually weigh about 3 grams.   Predominantly, these frogs have a bright yellow coloration with varying amounts of broad black stripes and/or spots that extend over the whole body.   Their coloration is a warning to potential predators that they will make an unpalatable or toxic meal.

The bumblebee is known to be fiercely territorial. They live in small groups in the wild, and will attack neighboring groups with surprising ferocity for creatures of their size. They will also warn off rivals by emitting loud calls (one of the loudest calls among poison dart frogs).   Their calls can be heard from some distance and is described as an innocent-sounding, bird-like trill.

They have a short, sticky tongue, which extends to catch prey.   Like most frogs, they feed on a variety of small insects.