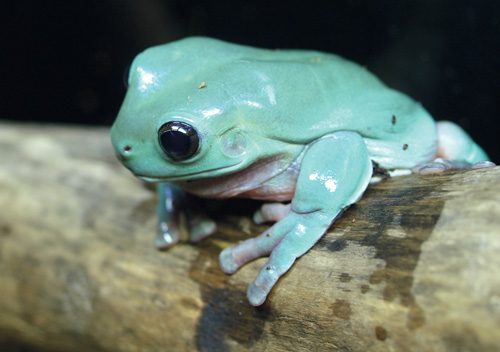 The green tree frog is larger than most Australian  frogs, reaching 10  cm (4  in) in length. The average lifespan of the frog in captivity, about 16 years, is long in comparison with most frogs. Green tree frogs are docile and well suited to living near human dwellings. They are often found on windows or inside houses, eating insects drawn by the light. The green tree frog screams when it is in danger to scare off its foe, and squeaks when it is touched.

Due to its physical and behavioural traits, the green tree frog has become one of the most recognisable frogs in its region, and is a popular  exotic pet  throughout the world. The skin secretions of the frog have  antibacterial  and  antiviral  properties that may prove useful in  pharmaceutical  preparations.