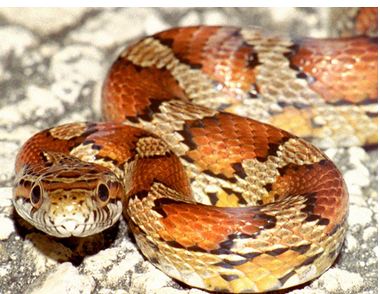 An Everglades Corn Snake is a corn snake that is native to the Everglades.   Corn snakes can be found in the eastern United States (southern New Jersey down throughout Florida and west into Louisiana).   However, the majority of this species is found in Florida and southeastern United States.   Generally, these snakes are found in wooded groves, wood lots, barns, old buildings, rocky hillsides and meadowlands.

These snakes reach lengths of 24-72 inches.   There is a variety of color variations, markings and patterns, all contributed to the age and region of where the snake originates.   Usually they are brownish-yellow, orange or reddish orange with black edging around their pattern.

Primarily these snakes are diurnal (active during the day).   They can climb trees and actively hunt prey, but they spend much of their time underground.   They will often investigate rodent burrows and prowl under logs, rocks and other debris, staying out of sight.

Corn snakes are non-venomous but are constrictors.   The snake will bite its prey to grasp it in its mouth and coils around it, squeezing, to suffocate the victim.   Usually, it feeds on mice, rats and other small mammals.   If it is a small prey, it may swallow it while it is still alive.

Female snakes will lay her eggs in clutches of 10-30 eggs, usually in late spring.   She has no maternal instinct and does not care for the eggs once they are laid.   The incubation period for the eggs are 60-65 days.