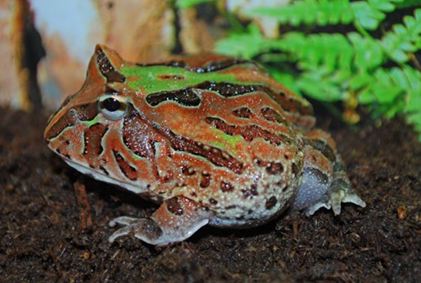 The Fantasy frogs are also known as South American horned frogs as well as Pacman frogs due to their characteristically large mouth and abdomen, thus resembling the video game character Pac-Man.   These frogs are a hybrid cross between   a c. cornuta and c. cranwelli.   These frogs tend to be a medium to dark green or yellow color with red and black patches in their patterning. Many of them usually start out a bright green color, but this will change as they grow into various combinations of brown, beige, green, orange and yellow.

Ornate Horned frogs can be found in Northern Argentina, Brazil and Uruguay, while Cranwell\’s Horned Frogs originate from the Chacoan regions of Brazil, Argentina, Paraguay and Bolivia.

The fantasy frogs spend a lot of time buried just below the surface of the ground. They stay there camouflaged amongst the undergrowth and wait for prey to come to them. They are not very active and can grow a cocoon of skin around themselves (called â€œEstivationâ€) in cool temperatures to help keep moisture in while they hibernate.

They are voracious eaters, often eating insects, small mammals (such as mice), fish, other frogs, and small reptiles. A fully grown female (females are generally larger than males) can easily eat a grown rat.   These frogs are also known to be cannibalistic, and have been known to eat their mates, even if they are larger than they are.   Although these frogs can swallow animals almost half their size, they sometimes attempt to eat things larger than they are. A row of sharp bony projections in their upper jaw makes it nearly impossible for them to release prey after taking it in their mouth, in some cases leading to death by choking.