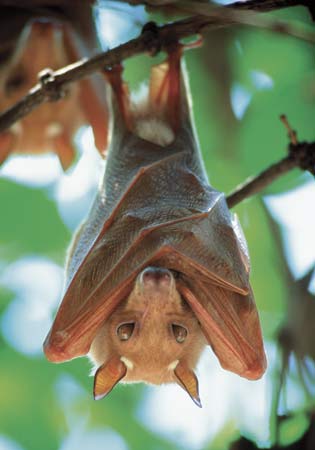 The Fruit Bat falls into the category of the Megabat and sometimes they are called the Flying Fox in some locations. There are many differences in their size from one location to the next. Due to that variation these bats are often mistaken for many different types rather than being identified as the same.

For example some Fruits Bats are no more than two inches long. Others though are more than 16 inches in length. Some of them only weigh an ounce or two and others weigh in at a couple of pounds. The overall wing length of the Fruit Bat can be more than five feet. These bats have large eyes and they also have excellent vision.

In fact, the Fruit Bat is said to have the best overall vision of all bat species. They use their vision in conjunction with their sense of smell so that they are able to find their food sources. These senses also serve to help them avoid dangerous situations. They are a very small type of bat and they are said to be among the most unique of the more than 1,200 species that have so far been identified.

The Fruit Bat has some sharp teeth that allow it to penetrate the skin of the fruits. They also have very long tongues that unroll when they are feeding. When they aren\’t eating the tongue rolls back up. It is tucked away internally around the rib cage rather than remaining in the mouth.

The shape of the wings on Fruit Bats can be very different based on location. Many experts believe that this type of anatomy difference has to do with the fact that they live in different areas and have different types of fruit trees that they eat from. The wings may be certain designs to help compensate for wind and other elements in their natural environment.

Since most species of bats consume insects, the Fruit Bat is one that people are interested in. It is believed that they turned to eating in such a manner in order to help them survive. Circumstances could have warranted them deciding to consume a different type of food source in order to compensate for not enough insects being around.