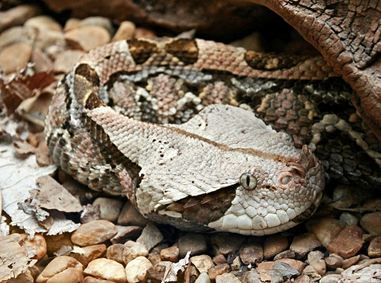 The Gaboon Viper originates in West Africa and inhabits Guinea, The Ivory Coast, Togo, Ghana, Cameroon, Benin, Angola, The Congo, and Gabon.   They are usually found in rainforests and nearby woodlands, mainly at low altitudes.

This is not only the largest member of the genus Bitis, but also the world’s heaviest viperid.   Adults average 4-5 feet in length and can get over 6 feet in length in large specimens.   They can weigh between 25-44 lbs., making them the world’s heaviest viperid. The Gaboon Viper has the longest fangs (up to 2 inches), and the highest venom yield of any venomous snake.

Bites are relatively rare, due to their docile nature.   Because they are sluggishness and unwillingness to move even when approached, people are often bitten after they accidentally step on them, but even then in some cases they may not bite.   However, when a bite does occur, it should always be considered a serious medical emergency. In humans, a bite causes rapid and conspicuous swelling, intense pain, severe shock , local blistering, swelling of the tongue and eyelids, convulsions and unconsciousness. The blood may become incoagulable with internal bleeding.   Healing may be slow and fatalities during the recovery period are not uncommon.

Because of their large, heavy body size, the adults have no trouble eating prey as large as fully grown rabbits. Mainly they lie motionless and wait for prey to cross their path.   When prey happens by, they strike with very fast precision from any angle. Once they strike their prey, they hang on to it with their large fangs rather than letting it go and waiting for it to die. This behavior is very different from the behavior of other species of vipers. These snakes feed on a variety of birds and mammals, such as doves, many different species of rodents, including field mice and rats, as well as hares and rabbits.