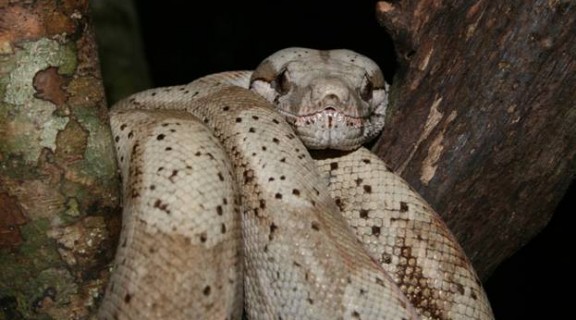 The Round Island boa is the only snake in its genus. Currently found only on this small island off Mauritius, the species previously lived on other offshore islets as well as on the main island.

The boas have suffered from the loss of their habitat, but a restoration programme for Round Island run by Durrell and its partners has removed introduced goats and rabbits from the island and allowed native habitat to regrow. This in turn has helped numbers of the boas\’ natural prey â€“ small reptiles â€“ to increase, and the boa population has climbed from about 250 in the 1990s to about 1000.

Adult Round Island boas grow to a length of up to 150 cm (5 ft). The males have slimmer, more pointed heads and shorter bodies than the females. The body is covered in small keeled scales.

Special skin cells allow these slender snakes to change colour over a 24-hour period. They are darker during day, when they are relatively inactive, and lighter at night when they are more active.

The boas lay clutches of up to 12 soft-shelled eggs in leaf litter or in hollow palm trunks. Females have sometimes been seen caring for the nest.

Uniquely among vertebrates, Round Island boas have a split jaw that may help in catching their main prey of geckos and skinks. To get Round Island Boas to feed in captivity, staff scent small mice with chicken meat.