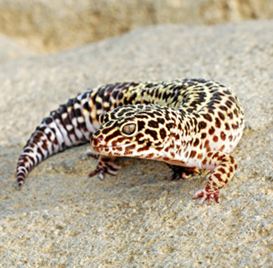 Leopard geckos are typically large for a gecko.   Adult geckos are about 8.1 to 10.9 inches in length and weigh about 45 to 65 grams.   The skin of a leopard gecko is very durable, which provides protection from the rough sand and rocky hills terrain of their dry environment. Their dorsal side is covered with small bumps, which gives a rough texture and appearance while their ventral side is thin, transparent, and smooth.   They absorb warmth and energy during the day as they are sleeping, so they can hunt and digest food at night. In addition, they have short legs, which enable them to be quick and agile while their small nails allow them to climb twigs and rocks. Leopard geckos have openings on either side of their head as ears. A tympanic membrane covers and protects it. They use their ears to locate their prey.

The native habitat of the leopard gecko is the rocky, dry grassland and desert regions of south-Asian Afghanistan, Pakistan, north-west India, and parts of Iran. Winter temperatures in these areas can be quite low, below 50 degrees F, forcing the animals underground into semi-hibernation, called brumation, living on fat reserves.

Leopard geckos feed on crickets, waxworms, mealworms, super worms, crickets and other insects. When food is scarce in the desert, they can rely on their ability to store excess fat in their tails.   Their keen sense of smell and sight allows them to search for food in the wild, they will stalk their prey just like an actual leopard will, move their tail, and then strike until they are satisfied.

Females can store sperm over the course of their breeding season, so they can produce up to 3 clutches from one or two mating encounters.   Each clutch will consist of two eggs. They will normally lay eggs approximately 21 to 28 days after mating. After 45 to 60 days, the hatchlings will emerge.   They are also known to have temperature-dependent sex determination (TSD). Generally females are produced in predominantly cool temperatures (79â€“86 °F) and very warm temperatures (93â€“95 °F). It was recorded that males can be produced at the intermediate temperatures (88â€“91 °F). Females born in warmer temperatures expressed more aggressive behavior. These are known as “hot females” and are often determined to be infertile.